Our retail facilities, service centers, and websites are open.
For many customers, your RV is your home, and we know you depend on us to provide essential products and services that are critical to keep your home functioning and safe. Whether those essential needs are cleaning, safety, sanitation, replacement, or essential operation of your RV, in this time of uncertainty, we are here for you. We will continue to evaluate conditions on a market by market basis, but our goal is to remain open in a safe and healthy environment to provide the essential products and services needed to keep you and your home safe and healthy. The most up-to-date store hours can always be found on Overtons.com, CampingWorld.com, and GanderOutdoors.com.
Skip to main content
Shop RVs Shop Gear
FREE Standard Shipping over $99. Good Sam Members: FREE Shipping over $49 See details  |  Help? (888)-626-7576 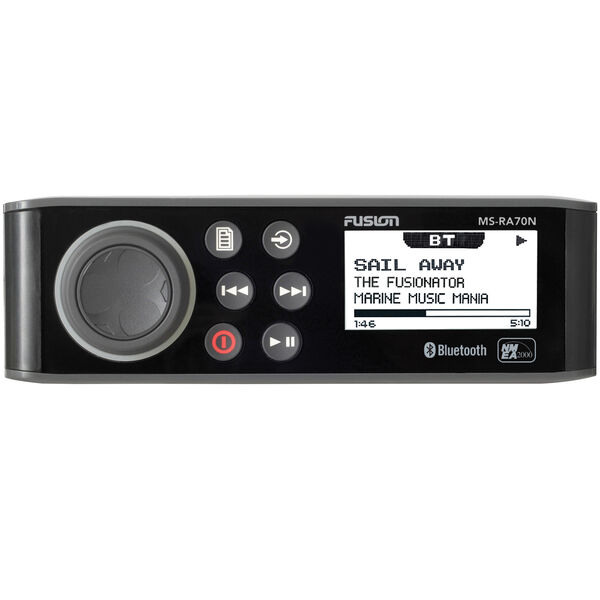 Item No. 321896
$289.99
Free Shipping
Additional Information
Features
The Fusion MS-RA70N Stereo is packed with user-friendly features and built to handle the marine environment. This sleek stereo is also NMEA 2000 Ready for connection and control from any supported multi-function display, so you can keep an eye on the fishing charts while controlling your music at the same time. With A2DP Bluetooth audio streaming, it's easy to stream music from any compatible device.

Music Playback
Apple Playback - The MS-RA70N offers direct playback from the latest IAP2 supported Apple devices via USB. Charge the device via the Fusion USB connector. Control is limited to play, pause, and skip from both the stereo interface and the Fusion Bluetooth app remote.

Android AOA Playback - Connect and enjoy music from any supported Android AOA device via USB. Control is limited to play, pause, and skip from both the stereo interface and the Fusion Bluetooth app remote.

USB Media - Music stored on a compatible USB flash drive can be enjoyed through the RA70N with support for MP3, M4A, and AAC included. Access your music folders and pre-saved playlists via the stereo and Bluetooth app remote interface.

AM / FM Radio Tuner with support for DAB Radio.

Multi-Zone Technology
The Fusion MS-RA70N offers independent control of the volume level in two separate audio zones. Multi-Zone Technology also includes functionality for naming zones, linking zones, or setting volume limits. An additional line out and sub out are included and linked to Zone 1 for addition of an amp or subwoofer.

NMEA 2000 Ready
The MS-RA70N is a Fusion-Link Wired NMEA 2000 certified product and is compatible with a range of the world's leading multi-function displays for onscreen audio control. When pairing the MS-RA70N with a supported chartplotter or fishfinder you bring your music to the big screen, allowing you to keep an eye on the charts or the fish while skipping tracks or adjusting the volume at the same time. In addition, the MS-RA70N will connect to any Fusion MS-NRX200i remote control (not included) attached to the same powered NMEA 2000 network for localized control of the audio zones.

Widescreen LCD - The widescreen LCD is optically bonded to improve durability and eliminate the possiblity of condensation or fogging appearing while out on the water. The MS-RA70 LCD display is able to resist extreme temperatures and operate in direct sunlight.

IPX7 Waterproof - The front panel of the RA70N is rated to withstand the marine environment like no other stereo.

Flat or Flush Mountable - The MS-RA70N can be installed conventionally with a flush finish or integrated into a glass helm with a flat surface finish. This allows for a more streamlined dash and high end installation.