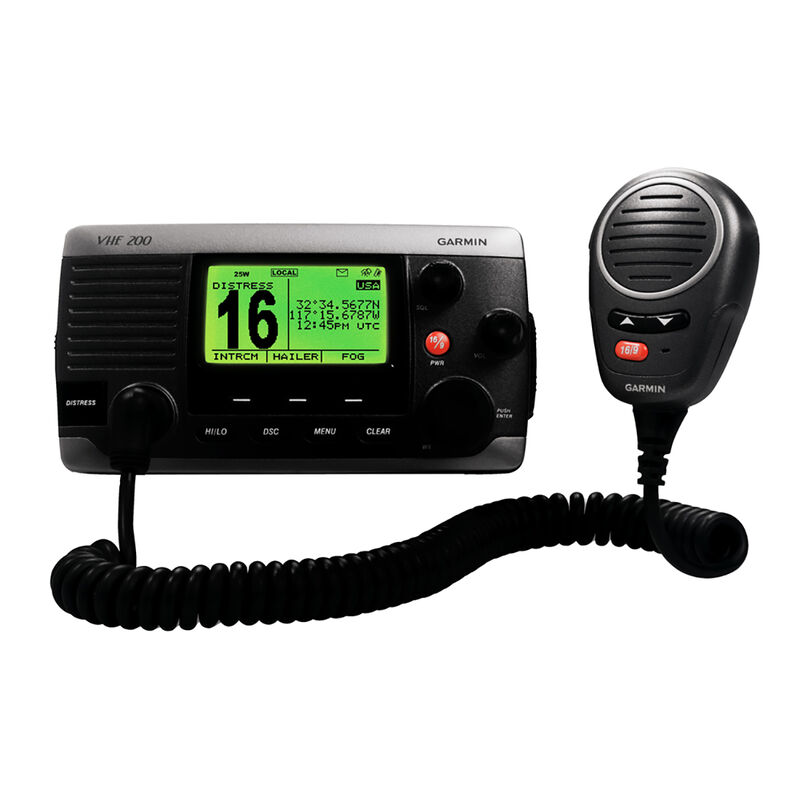 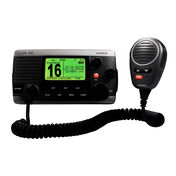 Communicate with Confidence
With up to 25 watts of transmit power at your fingertips, you'll be able to stay in touch anywhere on the water. The VHF 200 comes standard with a removable speaker microphone and a built-in 20-watt public address (hailer) system that can be connected to a hailer horn or external speaker on the deck or tower. The VHF 200 also supports one optional wired GHS 10 hand-set microphone that allows full radio control from a remote location.

Safety First
The Garmin VHF 200 provides full Class D Digital Selective Calling (DSC) capability via NMEA 0183 or NMEA 2000 connectivity. Should trouble arise, DSC provides distress calls with the push of a button. And if your boat is already interfaced with a compatible GPS chartplotter, you'll get mayday signaling and a digital broadcast of your boat's position. The VHF 200 also features NOAA weather alerts and Position Tracking, which allows a mariner to locate and keep tabs on up to three other boats in the area.

At-A-Glance Information
The VHF 200 has a simple user interface that's easy to read while on the go so you'll always have the right information at the right time. In addition to dedicated buttons and knobs for ease of use, the VHF 200 features three soft keys linked to onscreen menus that allow boaters to see and select the information they want. The VHF 200 also offers premium sound quality so every message is loud and clear. And to make sure the data stands out, the information is available on a 3.2" display - the largest screen available in its class.

Detailed Design
The VHF 200 is ready to take on the elements. And to simplify the installation process, it can also be mounted in a variety of configurations. With removable front caps, the VHF 200 can be easily added in cockpit consoles or cabin bulkheads. It's made to last with rugged design that's also submersible (IPX7 standards), so you'll get a full-featured marine receiver in a compact fixed-mount design.

Unit Weight
5.90 lb
Brand
Garmin
You May Also Like