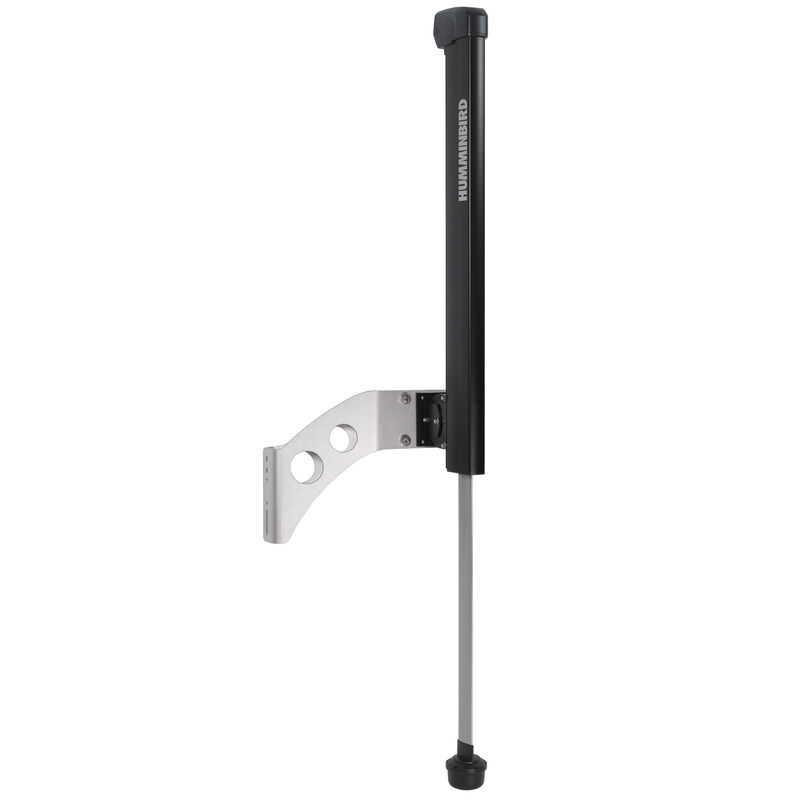 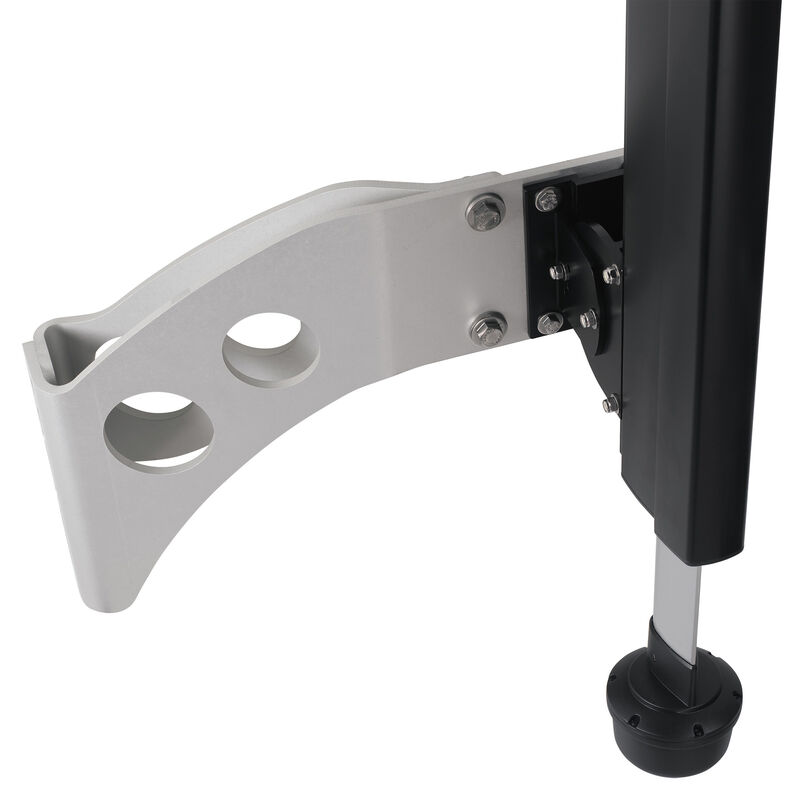 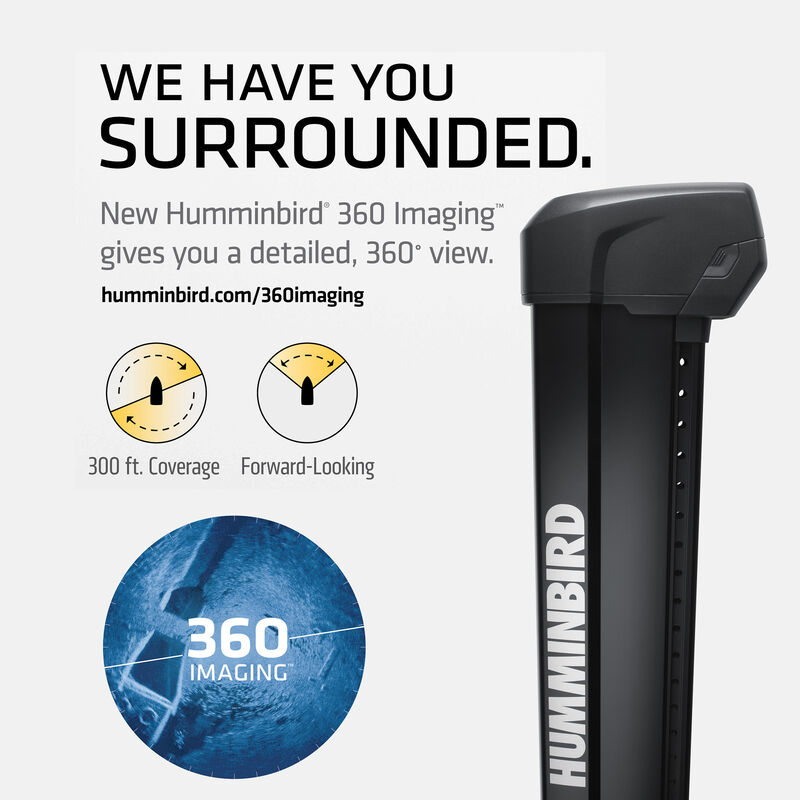 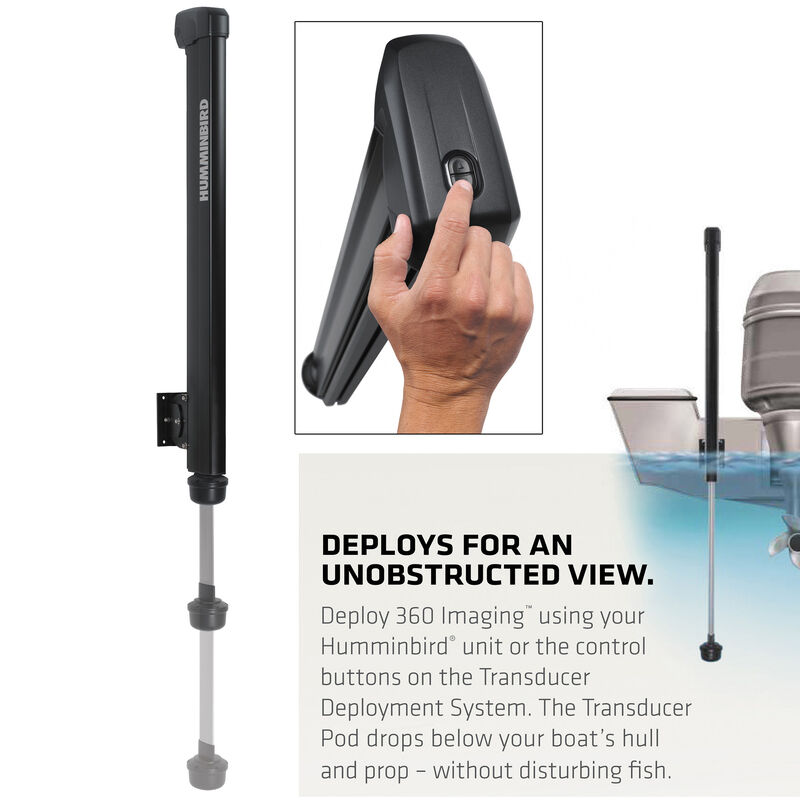 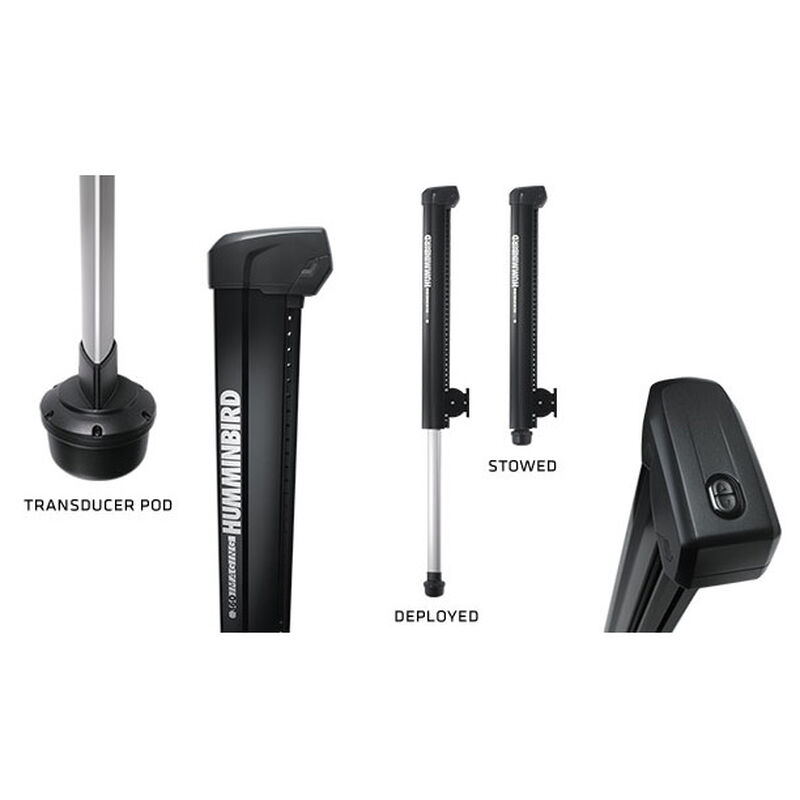 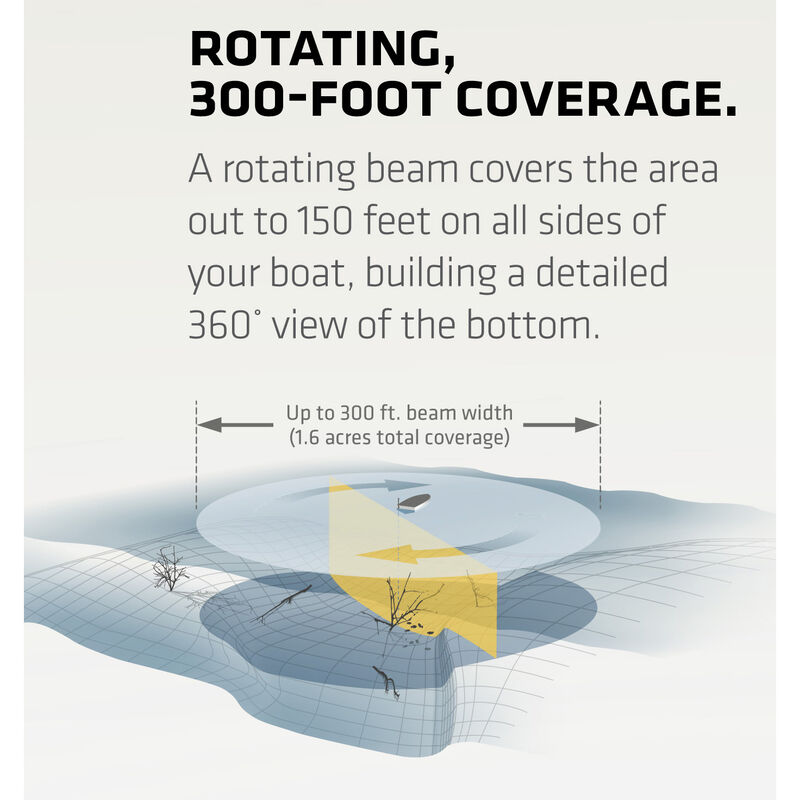 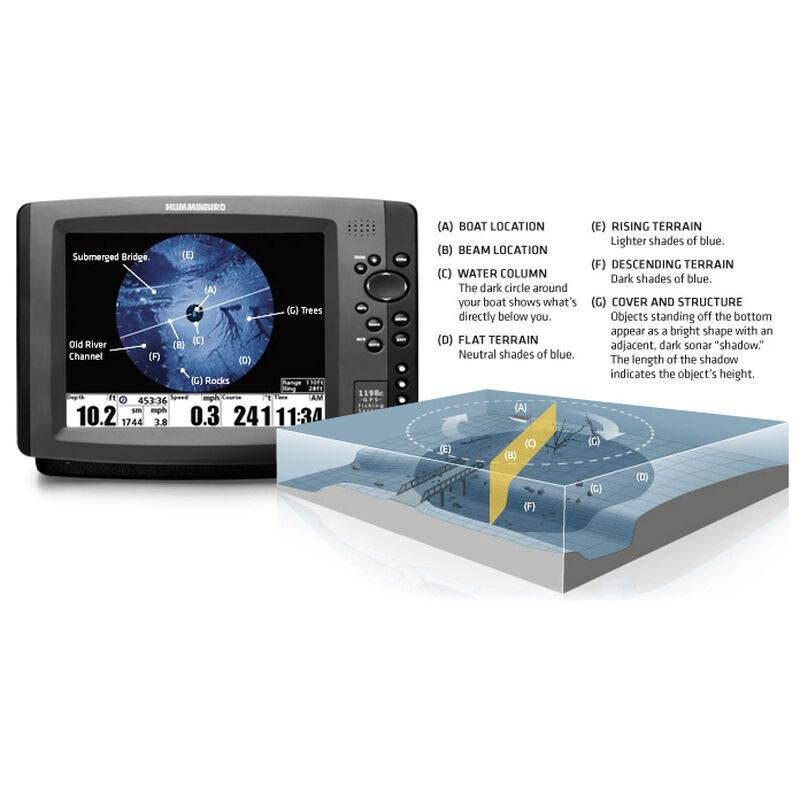 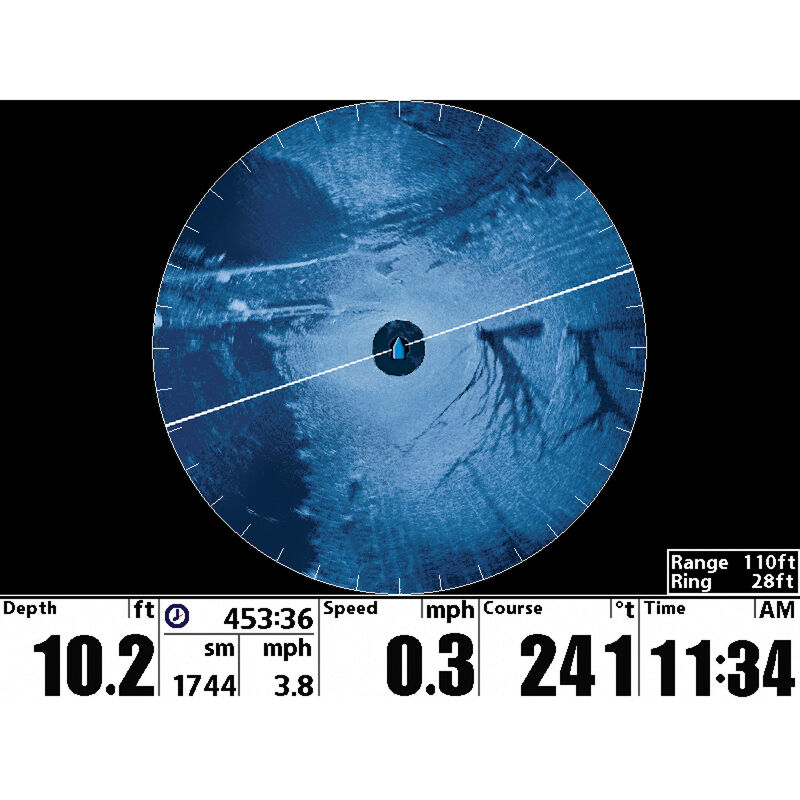 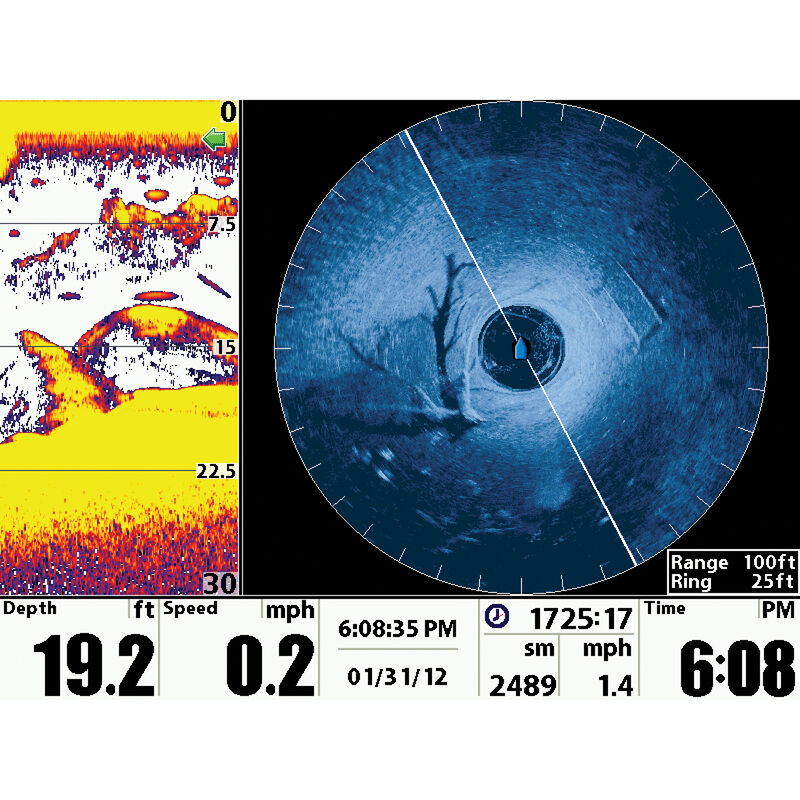 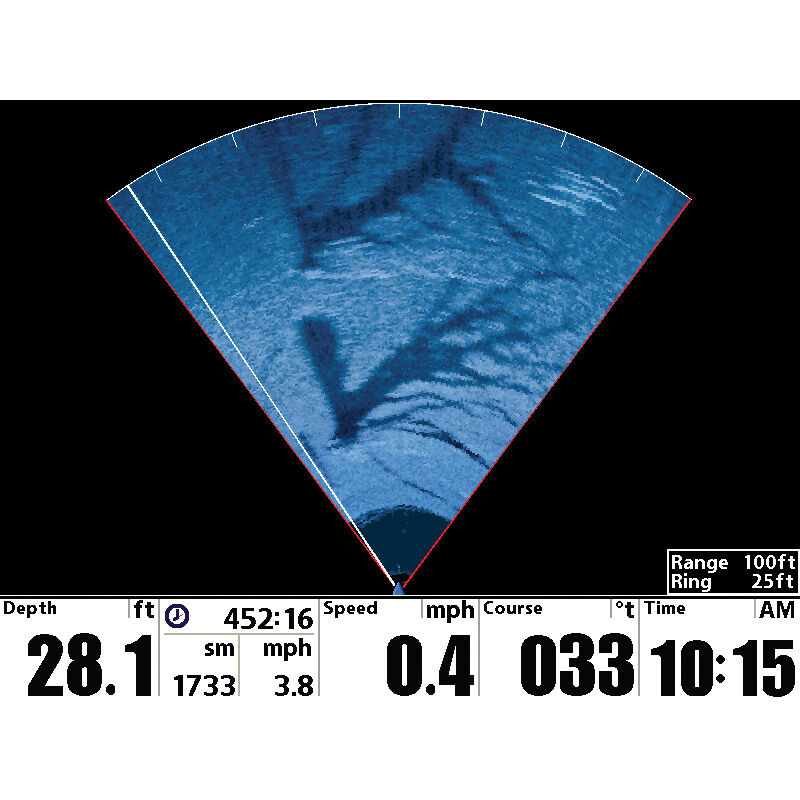 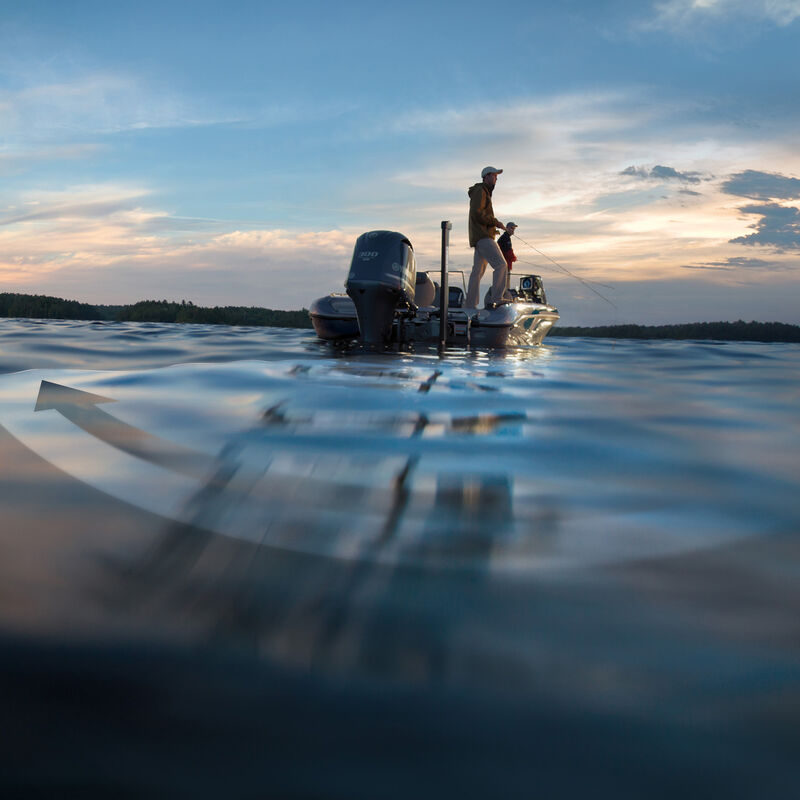 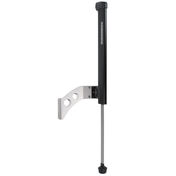 Revolutionary 360° Imaging scans underwater places that are virtually impossible to see with conventional sonar. It produces a 150' beam that sweeps in every direction to create a 300' circle of detection around your boat, letting you see fish all around you without moving over them (1.6 acres of total coverage). The imaging beam sweeps the surrounding water and detects fish, underwater structure, rocks, terrain changes and more - helping you target fish hideouts with surgical precision that would remain hidden to other sonar devices.

Four beam speeds and adjustable 10°-360° sweep areas let you fine tune the system and isolate specific areas for maximum detail or faster returns. The lower beam speeds scan slower and more thoroughly to produce better-quality images, while the higher beam speeds deliver faster refresh rates. The adjustable sweep area lets you adjust the beam sweep between 10°-360° in any direction, or choose one of four preset sweep settings that scan fore, aft, port, or starboard with a 180° arc. Mark important returns with a waypoint and keep track of productive fishing spots with the GPS on your Humminbird unit (select units only).

The 360° Imaging Transducer Deployment System silently lowers the transducer below the hull and prop for unobstructed views at every angle. The transducer can be deployed with easy-to-use buttons on the near-silent Transducer Deployment System housing or by using the controls on your Humminbird fishfinder unit, and it's adjustable to prevent grounding and allow fishing shallower depths.


UNDERSTAND THE BEAM
Visualize 360 Imaging as a thin sonar wall extending 150' to either side your boat. This wall rotates to create a 300' circle, updated in real time, that enables you to see areas virtually impossible to reach with other types of sonar, letting you see fish all around you without moving over them (1.6 acres of total coverage). Because the sonar wall moves, you don't have to move.

SWEEP AREAS
New 360 Imaging allows you to isolate your sweep area over a section of water from 10° to 360°. You can lock in your beam anywhere, but the area in front of your boat is especially useful. Because your transducer has less ground to cover, you'll also benefit from a faster refresh rate.

MARK A WAYPOINT
Mark interesting returns with a waypoint directly on your 360 Imaging screen. The exact location will be stored in your unit's memory and is viewable on GPS cartography.

Now that you can look forward, there's no looking back.
For the first time ever, you can see up to 150 feet in front of your boat, either in full 360 mode or by isolating your sweep area. With valuable intelligence on fish-holding structure and cover waiting up ahead, you can cast to productive areas without spooking fish.

CUSTOMIZE YOUR DISPLAY
Choose from eight color palettes for more flexibility. Based on water conditions, you can adjust sensitivity for the best returns. Even adjust sharpness to enhance edges and detail depending on lighting.

SWITCHFIRE/360 VIEW
View 360 Imaging side-by-side with SwitchFire or GPS cartography. SwitchFire lets you see what's going on below your boat while GPS puts valuable waypoints, routes, and other navigational information at your fingertips.

DROP IN WITHOUT CAUSING A STIR
At your command, the ultra-quiet 360 Imaging Transducer Deployment System drops below your boat's hull and prop for an unobstructed, 360° view. The system operates silently, escaping the notice of nearby fish.

TWO DEPLOYMENT OPTIONS
When the timing is right, you can deploy 360 Imaging using your Humminbird unit or the control buttons found on the Transducer Deployment System. Easily manage the depth to which the Transducer Pod deploys to avoid grounding in shallow water.