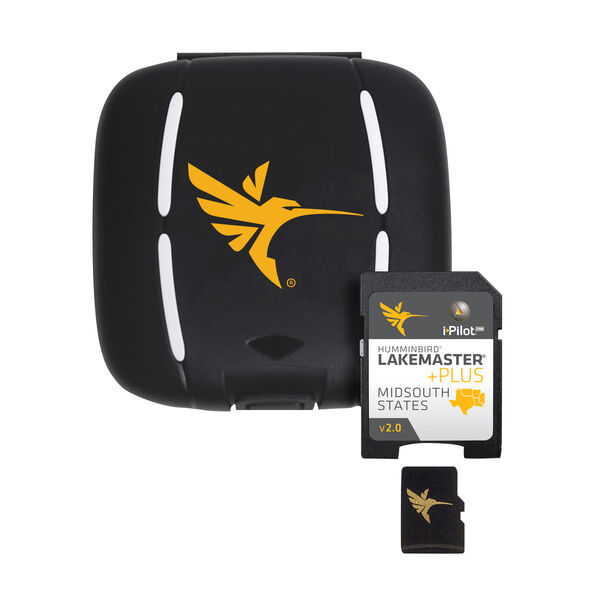 Some manufacturers impose minimum advertised price restrictions. If we lower the price of an item to a certain level, we can only show that price in the cart. If you change your mind about the item, simply remove it from your cart. The savings are worth a few extra clicks.

Free Shipping
Additional Information
Features
The Humminbird LakeMaster PLUS digital GPS map card series is a new family of map cards that parallels the standard Humminbird LakeMaster editions. Coverage area and lake lists remain the same, and both are compatible with most Humminbird GPS models, including the ONIX and ION units. PLUS has all of the features you have come to love from LakeMaster, but now allows for aerial image overlay on high definition waters. Now you have the ability to use quality aerial photography to view the entry and exits of creek channels, see how far a reef or weed line extends, pick out shallow water rock piles, steep drop-offs, and other features of the lake you have been missing from traditional maps. LakeMaster PLUS gives you the freedom to choose how you want to use the aerial imagery.

Each map card has added over 80 new lakes since the prior version, and boasts more than 250 High Definition lakes and over 360 total lakes from TX, OK, AR, LA, and MS. The PLUS series also gives you access to all of the LakeMaster features including the following:

For the first time ever, now including a complete High Definition survey Toledo Bend. Additional new features now include: High Definition surveys of Atkins, Conroe, Lake Fork Reservoir, Ray Hubbard, Ray Roberts, Texoma, and more!
Show moreShow less
Specs
Reviews
Rated 5 out of 5 by Eggie from Incredible details Just purchased a new boat and Hummingbird so detailed maps and navigation aides was critical and this product delivered!
Rated 3 out of 5 by Hawkeye from Incomplete I have used it one time and am disappointed. The lake map does not show creeks which is the main reason I purchased it
Rated 5 out of 5 by JustO from GLAD I DID A+ works great, easy to use..........................
Q & A

What version is this?