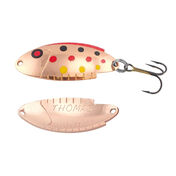 The link to Thomas Buoyant Minnow Spoon, 1/6 oz. has been copied

The Thomas Buoyant Minnow Spoon is unsurpassed as one deadly trout and salmon lure! First issued a U.S. patent in 1946, the Buoyant is an erratic-action wobbler that imitates the darting motion of a frantic, fleeing baitfish. This action – combined with jewelry-quality finishes – creates a spoon that entices even the wariest of trout or salmon, and many other types of game fish, into striking. It is important to use a moderately slow retrieve or troll speed for the Buoyant to achieve its most effective action. An occasional sharp twitch of the rod tip can really draw hard strikes! Cast or trolled, deep or shallow, the Thomas Buoyant has been a favorite of successful anglers for over sixty-five years! Made in the USA.